What Monkeys And 99% Percent Of The Population Have In Common 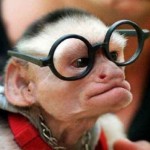 This is a story I first heard from Jamie Kraft, Managing Director at the UF Center for Entrepreneurship and Innovation. This story details what I consider to be one of the clearest reasons why the vast majority of people will not reach their goals in life.
—
Start with a cage containing five monkeys. Inside the cage, hang a banana on a string and place a set of stairs under it. Before long, a monkey will go to the stairs and start to climb towards the bananas. As soon as he touches the stairs, spray all the monkeys with cold water.

After a while, another monkey makes an attempt with the same result – again all the monkeys are sprayed with cold water. This continues until pretty soon whenever another monkey tries to climb the stairs all the other monkeys will try to prevent it from doing so.

Now put away the cold water. Remove one of the monkeys from the cage and replace it with a new one. The new monkey will see the banana and will attempt to climb the stairs. To his surprise and horror all of the other monkeys attack him. After another attempt, and attack, he knows that if he climbs the stairs he will be assaulted.

Next, remove another of the original five monkeys and replace it with a new one. The newcomer takes part in the punishment with enthusiasm! Likewise replace a third original monkey with a new one, then a fourth and then a fifth one. Every time a new monkey goes to the stairs it is attacked. The monkeys that are beating him up have no idea why they were not permitted to climb the stairs or why they are participating in the beating of the newest monkey.

After replacing all of the original monkeys none of the remaining monkeys have ever been sprayed with cold water. Nevertheless no monkey ever again approaches the stairs to try for the bananas. Why not? Because as far as they know that’s the way we’ve always done it around here. We call this TTWWADI.
—
This brings up the important question you need to ask yourself: What are you doing because you are expected to? This can be anything from your study habits to the way you exercise. Chances are you learned it from someone, who learned it from someone else…who learned it from yet another person. Innovation has ceased a long time ago and you have been left with an unimproved method or way of doing things.

Here is my challenge to you:

For a deeper reflection ask yourself where your current scholastic or career path is leading you. Are you heading down that path because you chose it as the optimal path to happiness? Or did you pick it because you are blindly following in the footsteps of someone else? Do not let society dictate your actions.

As Steve Jobs said, “Those who are crazy enough to think they can change the world….are usually the ones that do.”

About the Author
Nikolai De Leo is a Transaction Advisory Services Professional living in Miami, FL. When not working, he enjoys reading (his three favorite books are As a Man Thinketh, Atlas Shrugged, and the Picture of Dorian Grey), running (he has completed two half marathons and a triathlon in his favorite Vibram five fingers), and watching college football (he attended the University of Florida for both his undergraduate and graduate degrees).
Social Share
One Comment