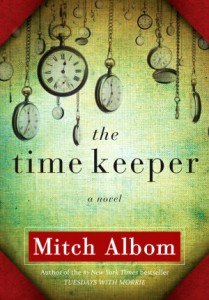 The Time Keeper is about the first man on earth to count the hours, or the man who became Father Time. In Mitch Albom’s newest work of fiction, the inventor of the world’s first clock is punished for trying to measure God’s greatest gift. He is banished to a cave for centuries and forced to listen to the voices of all who come after him seeking more days, more years.

Eventually, with his soul nearly broken, Father Time is granted his freedom, along with a magical hourglass and a mission: a chance to redeem himself by teaching two earthly people the true meaning of time.

He returns to our world–now dominated by the hour-counting he so innocently began–and commences a journey with two unlikely partners: one a teenage girl who is about to give up on life, the other a wealthy old businessman who wants to live forever. To save himself, he must save them both. And stop the world to do so.

Mitch Albom has written a fascinating tale that incorporates two opposite but connected characters and time. The book is composed of various short chapters and makes frequent jumps between the three main characters. Through these characters, the author begins to weave the eventual lesson about time and how we should perceive it. The story also includes a heart wrenching love story that really culminates in the letter to his readers at the end.

My favorite part: The book is so easy to read and yet delivers such a profound message. His style could engage anyone from a young teenager to an old man (not coincidentally two of the main characters in the book). I think he had this in mind when he wrote it and desired to reach a mass audience.

My least favorite part: The abbreviated writing story stops the complete development of the characters. The author jumps around so much that you never quite “feel” the characters as you would in a longer novel.