How to Win Friends and Influence People 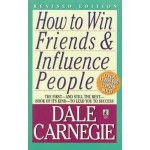 In a conversational style, Dale Carnegie offers practical advice and techniques for how to get out of a mental rut and make life more rewarding. He advises on how to make friends quickly and easily, win people over to your way of thinking, become a better speaker and more entertaining conversationalist and arouse enthusiasm among your associates. – Amazon.com

How to Win Friends and Influence People is one of the most influential books of the 20th century. Almost 75 years after it was first published, the book remains the greatest work on how to improve interpersonal communication skills and build relationships that will benefit you both socially and in business. It is just as effective today as it was in 1937 because Carnegie had a unique understanding of human nature, an understanding that still holds true today. Dale Carnegie outlines the most important principles necessary to master the art of communication and how to become an influential leader, such as “Don’t Criticize, Condemn, or Complain” and “Give Honest and Sincere Appreciation.” The principles in How to Win Friends and Influence People have served as the basis for several workshops as well, which still remain as popular self-development tools today.

My Least Favorite Part: Because it was first published in 1937, some of the people which Carnegie mentions may influence young readers less than more contemporary examples.